The 13-year-old one-armed boy Zhang Jiacheng had a glimpse into his dream of becoming a professional basketball player. Invited to visit the CBA champions Guangdong Southern Tigers club, the boy, shy as he is, displayed his brilliant skills and determination as he stepped onto the court.

The 13-year-old, who lost his right arm in an accident at the age of five, became an internet sensation in China after he posted a few video clips online showing his dazzling basketball skills with one hand. The videos were viewed by more than 50 million and became a Chinese twitter-like Weibo trend.

Zhang even drew the attention of NBA megastar Steven Curry, who said “Who is this kid? Help me find him” on Weibo on Tuesday.

Reporters rushed into Zhang’s home located in a small town some 200 kilometers from Guangzhou, filming the kid as the most famous athlete in the world.

“I don’t want to attrack so much attention. Too much media exposure is no good for him,” Zhang’s father said, who denied dozens of interview inquiries.

But Zhang continued to upload his basketball videos, and of course, replied to Curry.

“I am a fan of you and I like you very much because you are not so tall or strong, but you are the top player in the NBA,” he said in a video on Thursday.

The NBA star soon posted another video on Weibo one day later, hailing the boy as “an inspiration”.

“I just want to say you are an inspiration, you don’t take ‘no’ for an answer, you find the way to overcome and get out there on the basketball court and show people how much the game means to you.

“It’s awesome to watch, continue to be an inspiration to anybody that lays eyes on you, and show that you can,” Curry said.

Some may believe it is a mission impossible for a single-armed person to be a top basketball player. But for the boy, he would like to have a “try.”

“My dream is to be a professional basketball player one day,” Zhang said with his shining eyes.

He was at least one step closer to fulfill his basketball dream when he was invited to visit the Guangdong Southern Tigers club on Saturday.

The 13-year-old showed his skills with confidence taking one-on-one with Guangdong’s point guard Xu Jie, in front of some of the best players in the country, including his idol, CBA’s all-time leading scorer Yi Jianlian.

“He has shown his solid fundamentals and a good physical balance. We can feel his efforts behind with such performance at his age.

“I hope that he can carry on and enjoy the sport,” Guangdong coach Du Feng noted.

Zhang Jiacheng poses for a photo with his idol Yi Jianlian, holding a basketball signed by the Guangdong players, which is given to him as a gift. 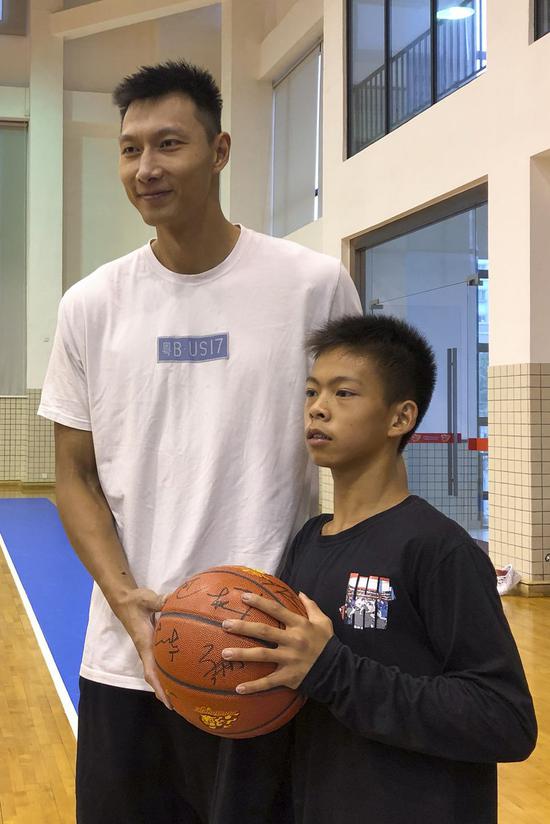 Zhang Jiacheng poses for a photo with his idol Yi Jianlian, holding a basketball signed by the Guangdong players, which is given to him as a gift.

The club also invited Zhang to watch their games on site after the league’s resumption starting from June 20.

Zhang has registered to become a junior athlete in Guangdong and got the chance of receiving systematic training in the sports school in Yunfu, local media reported.

“This is a kid with a great dream. Hopefully, he will grow up and become stronger without being diverted too much from his love for basketball,” the Guangdong club said.